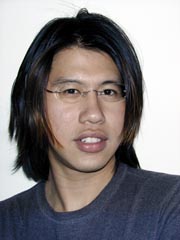 Joel Seah was born in Singapore and is a University Fellow at Syracuse University, New York where he is completing his Master of Fine Arts in Printmaking. He was a visiting artist at The University of Alaska in Anchorage, and artist-in-residence at the Victorian College of Arts in Melbourne, Australia and LaSalle College of the Arts in Singapore

Joel Seah  is a recent recipient of a Shaffer Fellowship at Syracuse University where he is currently a Master of Fine Arts candidate in Printmaking. Seah was honoured with the Emerging Artist Award at the 2001 Magic City Arts Festival in Birmingham, Alabama and was the International Artist-in-Residence for 2002 at the Victorian College of Arts in Melbourne, Australia. His work investigates the ideas of identity, culture and heritage and has been exhibited at numerous venues including The 6th Toronto Photography Festival, Canada, The Cleveland Sculpture Centre, Ohio, The Montgomery Museum of Fine Arts, Alabama, The Slidell Cultural Centre, Louisiana, The Art Centre of Northern New Jersey and The Bloomingdale Museum, Illinois.


His show Domestic Partners that was held at the Substation Gallery between 20 - 29 Jul 2004. Currently, the United States is in a time when domestic gay life is being brought to visibility through the debate of same sex marriages, the process of which could change the social meaning as well as the representation of domestic life.

In a series of 6 new large format digital prints, Seah brings to this discourse the notion that homosexuals need to assert their own identity into domestic imagery. Catalogue pages from IKEA, Ethan Allen and Pottery Barn have been scanned and enlarged, then re-configured. In each of these prints, a unique repeating pattern of male silhouettes has been super- imposed over the catalogue image, creating a scrim through which these domestic settings can now be re-evaluated and re-interpreted.


Joel Seah: Reclaimed was shown between August 23 - Thursday, September 23, 2004 at Western Illinois University. The exhibition featured prints and interactive mixed-media installation art by Joel Seah. The exhibition embraced notions of re-building personal identity and community through active individual and group involvement. The exhibition was held in conjunction with and in support of Western Illinois University's "American Democracy Project" and the 2004-2005 Campus Theme: "Now is the time… Civic Engagement." 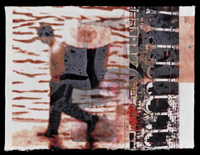 Joel Seah created an exhibition inspired by Marco Polo’s journey to the East, exploring his identity as an Asian artist travelling in Italy. He processed, cut up, collaged, and re-printed images collected during a month-long study tour of Italy to form a travel diary. In his attempt to reconstruct the dualities of East and West, and the aspects of spiritual and physical space, he showed the way our lives are increasingly connected, despite an increasing sense of dislocation in our global hybrid culture. His works were at Temasek Junior College’s The Scope Gallery in August 2004.

On His show Rediscovering Marco Polo, Joel Seah stated:
Growing up in a Chinese family in Singapore, where emphasis was placed on occidental thought, my work has evolved as the ideal process through which I can interrogate the dichotomies of "Eastern" and "Western" that have shaped my outlook, both personally and artistically.

As my knowledge of Chinese culture comes from research rather than first hand experience, I identify with the Chinese-American playwright David Henry Huang's observation that the paradox of "being Chinese today means rediscovering what it means to be Chinese today." However, it can also be observed that the ethnicity in this statement may be substituted for any other.† The continuous displacement from and reconnection to the sense of belonging is a journey that most people undergo, in one form or another, in an increasingly globalized society. I realize it is certainly not unique to being ethnically Chinese.

I am building a vocabulary of images and symbols that will allow me to reconstruct this universal experience from what is particular and specific to my own experience in "discovering what it means to be Chinese today." My studio practice has involved collecting found, video taped and photographed images relating to the idea of Diaspora from widely disparate sources, and then juxtaposing these images in different contexts. By manipulating the images in this manner, I seek to reassess through visual dialogue and interaction, their associated meanings and their relation to the reconstructions of place and space. The French philosopher Gilles Deleuze states: "only that which is alike differs and only differences are alike." In my work, I want to redefine, rather than resolve, the disparities of identity difference.

Formal training as a printmaker has influenced my exploration into digital technologies including high resolution scanning, video capture, digital image manipulation, as well as a variety of print output and transfer methods. I wish to explore the ways in which these can be used to reconstruct the process of documentation and memory as it pertains to the ideas of immigration and dislocation. Translating and transforming imagery through different media over a period of time, conceptually mimics the physical process of migration. Transporting imagery between virtual and physical states, graphically and metaphorically maps the changes that occur.

To this end, I have been particularly drawn to a gelatin-coated paper on which archival pigment dyes or vegetable dyes can be printed using ink jet printers. The printed images on this paper are transient and upon placing a receiving damp sheet of paper over the image on the gelatin-coated paper, the image re-hydrates and transfers to the receiving sheet. This monotype process allows the perceived sterile aesthetic of digitally produced work to obtain a surface that is organic, tactile and marked by human touch and accident.

In continuing to reconsider and confront my own perceptions towards methodologies and attitudes in creating, I wish to pursue the ideas and processes outlined in this statement as well as other questions that emerge as I develop as an artist both critically and professionally.

SAMPLING is a series of wall paper pattern designs composed entirely of text - words that Seah has said to past lovers, boyfriends and partners. In the concealing/revealing of these phrases with proposed designs for hypothetical domestic artifacts, Seah investigates the notions of public/private space, visibility/invisibility and absence/pressence as it pertains to contemporary gay ideology.

Joel Seah is a visual artist and printmaker based in America. His previous show at The Substation Gallery was Domestic Partners.