Since the Competition's inception, which is organised by the United Overseas Bank (UOB) Group, the College has won the top prize five times with alumni Lim Poh Teck in 1990, Chua Ek Kay in 1991, Raymond Lau in 1993, Hong Zhu An in 1994 and Tan Kay Nguan in 1999.

"My work is not about my identity, ethnicity or religion - it's about who we, Singaporeans, are and how we live our lives in Singapore," explains Erzan, who will be graduating with a Diploma in Fine Art (Painting) at LASALLE-SIA Convocation 2001 in September. "Our culture is filled with a variety of information that enters our mind and senses and, consciously or subliminally, constructs our identity. Thus, there's no such thing as 100% pure. We are made from a selection, juxtaposition and manipulation of various sources - like a music remix!"

In his painting, Erzan doesn't hide the multiple sources he's been influenced by - including Western art movements like abstract expressionism and cubism, and Chinese and Arab calligraphy. Even his take on consumerism in Singapore is subtly incorporated by various 'ethnic-looking' fabrics that seem to originate from a certain culture, but were actually purchased from Spotlight on Orchard Road.

Commented Kwok Kian Chow, Director of Singapore Art Museum and Chief Judge for this year's Competition, "The richness of heritages in a multicultural environment is a great inspiration for contemporary living". The title of the winning painting suggests that it is trendy to be old-fashioned. But this state of being 'square' is by no means a formulaic conformity to traditions. Rather, it is a dynamic, vivid and inter-cultural symphony of individuality, cultural depth and multiplicity. Erzan's work manifests a fresh perspective on heritage. It convinces by the successful integration of traditional motifs, abstract forms and a strong presence of brushwork. The panel of judges was also impressed by the layering of concept, formal expression, questions and answers, and sensitivity to traditions in the painting."

Erzan had always been interested in art - spending his primary school days doodling, drawing and being part of the art club. After an ITC Certificate in Mechanical & Electrical Drafting & Design from Institute of Technical Education, he wanted to pursue the creative side of design but discovered the world of painting at LASALLE-SIA - and the rest is history.

At LASALLE-SIA Convocation 2001, Erzan will be presented the Outstanding Student Award for his exemplary performance as a diploma student in the School of Fine Art. He is currently preparing for his first solo exhibition to be held in early 2002. He plans to do a degree in the future and secure an artist residency in China, Turkey, France or Scotland - and collaborate with an artist there. 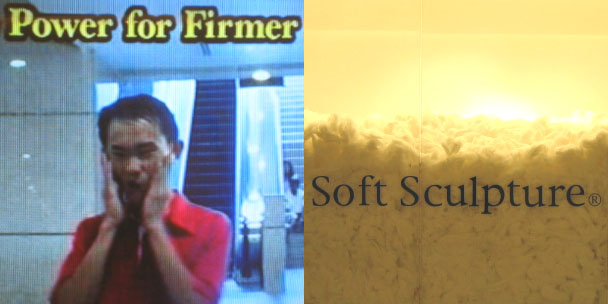 The latest instalment of tickle art features the works of Singaporean artists Erzan B Adam and Urich Lau.

ABOUT THE WORKS
Erzan B Adam's 'Text Box' is about the language of mass media advertisement. Mass media `boxes' television, radio, computers, and even the shopping malls are carriers of the language utilised by advertisers that sets up a new system of ideas and values (or desire) posing a challenge to traditional values and structure. Using and recontextualising the catch phrases of today's advertisements, he asks shoppers at this mall to give their interpretations of those slogans. These are recorded and played back over the `box'.

'Cotton Box II: Soft Sculpture® 1962' by Urich Lau makes a wry reference to American Pop artist, Claes Oldenburg. The work deals with "a rather unspoken condition of Singapore contemporary art, a side that is laden with western art ideologies and influences …(when) being stripped off of its original artistic content, the cotton is but a mundane, raw material".

ABOUT THE ARTISTS
Erzan B Adam won the highly acclaimed UOB Painting of the Year award in 2001. He had also been awarded prizes at the Philip Morris Art Awards as well as the Nokia Art Awards. Erzan obtained his Bachelor's for Contemporary Art from the University of Tasmania recently after graduating with a Diploma, majoring in painting, from LASALLE-SIA College of the Arts.

Urich Lau obtained his Masters from the RMIT/LASALLE-SIA College of the Arts, after earning a degree in Contemporary Art from the University of Tasmania in 2001. Lau has also been exhibiting in numerous visual arts group shows and multi-disciplinary collaborations consistently, both locally and abroad.

ABOUT tickle art
tickle art is a series of exhibitions curated by Susie Wong and Jennifer Teo that is held at 2 showcases in CityLink Mall (exit to Esplanade). It features art that is contemporary, site-specific and community-linked - art that is connected with its audience and yet, in a form or media that challenges conventional perceptions of art.

The Dean's Roll of Excellence for 2003

The Dean, Professor Pakulski, on behalf of the Faculty, extends congratulations to the following students (among mentioned: Erzan Bin Adam) in the Faculty who achieved outstanding results for 2003 and were admitted to the Dean’s Roll of Excellence.