Art in Conversation with Technology 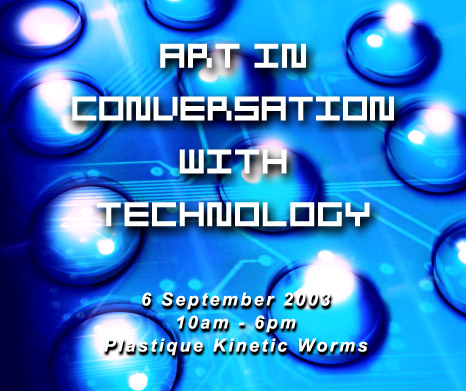 Singapore may well be one of the most wired cities in South East Asia, with ever increasing wireless LAN networks in workplaces, Singapore ONE potentially linking all homes to the information highway. The IT Master Plans launched by the Ministry of Education, assembling impressive IT infrastructure, of different scale, into all schools, promises engaged learning in an IT culture. With an increasingly techno-savvy, techno-oriented audience, does it change expectations and perceptions of art in Singapore?

Art and Technology are often seen as two different disciplines but with convergent ideals, functions and audience. They can be said to hold the principle that they are made by people, for people. ‘new’ Art or new ways of seeing art and technological advances pushes set boundaries, questions the way societies, communities and nations think and behave, or make money. Some live on, for one or the other. Whilst the current generation of students in Singapore are more IT-savvy, because of a greater promotion in the arts they may have had more exposure to visual art than the previous generation did.

The relationship is symbiotic; art offers new or different perspectives of looking at people and things, while technology enables artists to use new media to express these perspectives. One may be specific and read the terms to refer to contemporary art and contemporary Technology. The former will remind us of artworks that are explicit to our socio-cultural context, the latter referring to skills or equipment that are the epitome of our age: cloning, the Internet, et al. One such intersection, we get cyber-arts. Where the two disciplines fail to meet or are incompatible, we have possibly 3 scenarios. Firstly, artists in caves; secondly, artists whose lives are engaged by technology but not necessarily making works criticising modern technology since there is so much to life; and artists with gadgets.

How one sees artists ‘engage’ technology in the process of art making is purely a question of taste whether one likes or dislikes the technique.


PKW is proud to present “Art in Conversation with Technology” as part of its multi disciplinary talk on contemporary art in Singapore. Consisting of 3 sessions various practising artists will be presenting their works followed by floor discussion. The focus will be on how and why artists engage or disengage with technology in the process of art making.

The talk is free but limited seats available. Please call or email us early for reservations to avoid disappointment.

10.00 am
Introduction by Lim Kok Boon

Cecily Briggs is a painter, writer and independent curator. She holds a BA in Fine Art, a Post-Graduate Diploma in painting and a Masters Degree in Communication & Cultural Studies. She is currently a Teaching Fellow at the Visual & Performing Arts, National Institute of Education, Nanyang Technological University, Singapore.

Cheo Chai-Hiang graduated from the Royal College of Art before becoming a Rome Scholar at the British School at Rome. He was a Senior Lecturer at the School of Contemporary Arts, University of Western Sydney. He is currently working on a project with the Contemporary Asian Arts Centre.

Before taking up his present position here at NIE Singapore, he was head of sculpture at the University of Southern Queensland (1989-1995) Queensland University of Technology (1996-1997) and worked in the Creative and Visual Arts degree programmes at Griffith University Brisbane Australia. He developed and presented a series of workshops/lectures for Australian Flying Art Inc. over a two-year period in the southern regional areas of Queensland. He has taught in the US, and exhibited work within Australia, Europe and the Asian/Pacific region, with artists-residencies in France, England and the US. He was part of a team that under took a Caut Grant (Committee for the Advancement of University Teaching) looking to "provide intellectual access and participative experience in the Visual Arts at a Bachelor Degree level for interactive, self paced learning in three dimensional studies" via the use/integration of the 'new technologies.

John Low works with a variety of media for his installation works. He is currently pursuing a PhD in Art at Curtin University and lectures at Nanyang Academy of Fine Arts.

Khiew Huey Chian graduated with a Master of Arts in Fine Art (Painting) at the Royal Melbourne Institute of Technology (RMIT), LASALLE-SIA College of the Arts, Singapore in 2002. He received The Della Butcher Award (Certificate of Merit) in 1996 and the JCCI Arts Award (Arts Section) in 2000. He has been involved in numerous exhibitions since 1996.

Lim Kok Boon is a visual artist that deals with an aesthetics of the
everyday. Occasionally, he writes on art for Vehicle and for friends. He graduated from Goldsmiths College, London in 2001 and is currently a student at NIE.

Shing Ee graduated from LASALLE-SIA college of the arts and went on study her Masters at Musashino Art University, Tokyo under a JCCI art scholarship. She has exhibited her works in various shows both in Japan and Singapore.

Lee Sze-Chin graduated from Goldsmiths College, London in 2002 and is currently serving his NS. Some exhibitions which he was involved in include “B.E.A.U.T.Y” at Utterly Art, Singapore and “See Singapore!” The Contemplation Room Project in Overgaden, Copenhagen, Mr Lee presents: Mr and Mrs. Lee’s Chinatown tour.

Margaret Tan received her diploma in Visual Arts (Painting) LASALLE-SIA College of the Arts in 1999 and went on to complete a degree at the Royal Melbourne Institute of Technology (RMIT) conducted at LASALLE-SIA College of he Arts. She is a practicing artist who situates her practice within a feminist context. She works with a wide range of medium from objects, performance and installation to new media. She was the recipient of the Outstanding Achievement Award (RMIT) in her Bachelor of Fine Arts programme and became the first Artist-in-Residence with the Cyberarts Initiative, University Scholars Programme, National University of Singapore.

Michael Lee Hong Hwee is a visual artist, art writer and independent curator. He co-curated Eye-dentifying Peranakan Cultures (NAFA Middle Gallery, 2001-2) and Cinepolitans: Inhabitants of a Filmic City (Jendela, Esplanade – Theatres on the Bay, 2003), and has written for Asian Cinema, Singapore Architect, vehicle, iSh and various art exhibition catalogues. He has won awards for his collaborative videos, including first prize for the Experimental Category in the University Film and Video AssociReceived: from AlphaPri-MTA by gw3alpha.nafa.edu.sation’s Student Short Film Competition 1997 in
Texas, USA, and the United Television International Award for Distinction 1996 in Singapore. He has participated in numerous local artexhibitions, such as 20th UOB Painting of the Year (UOB Plaza, 2001), Nokia Singapore Art (Singapore Art Museum, 2001-2) and Sensitive Parts (Plastique Kinetic Worms, 2003). He is currently Acting Deputy Head of the Fine Art Department in Nanyang Academy of Fine Arts, Singapore, where he lectures on Western art history and selected topics in art theory. Concerned about the relations between desire and space, he is particularly intrigued by how human wishes may reflect, affect and interact with the architectural environment. Michael has a Master of Communication Studies from Nanyang Technological University, Singapore.

Lecturer, art maker and Georgette Chen scholarship recipient, Paul Lincoln received a BFA (Painting) from Royal Melbourne Institute of Technology, Australia in 1999 and is currently lecturing Interactive Art at the School of Multimedia Art, LASALLE-SIA College of the Arts, Singapore. He is a founding member of the web art group www.codedpixels.org and a committee member of the ACM, SIGGRAPH Singapore Chapter. Primarily interested in thematic investigations of social division and discourses in mass media, Paul implements formalistic and comparative language in his work. His most recent endeavors have been in the artistic direction of Mixed Reality Technology with Dr. Adrian D. Cheok of the National University of Singapore and they recently exhibited at the Festival Ars Electronica 2002, Futurelab – Ars Electronica Centre, Austria (2002) and at GRAPHITE 2003, Australia (2003).

Keng Hock is a molecular biologist with a PhD in Plant Molecular Biology from University of Cambridge and has lectured at the National University of Singapore from 1992-2001.He is currently the director of Biomin Laboratory Singapore Pte Ltd and one of the directors of Utterly Art.

Venka Purushothaman is Senior Lecturer of Arts Management at LASALLE-SIA College of the Arts. He specialises in teaching and researching critical issues in the visual arts, cultural policy and arts business. Venka has published in various journals, periodicals and exhibition catalogues and sits on a number of expert and resource panels on funding and programming in Singapore. Prior to his career in academia, Venka was a marketing specialist with a number of arts organisations including the Esplanade-Theatres on the Bay, The Arts Magazine and the National Arts Council. His research interests include Asian aesthetics in popular culture and cultural policy. Recently he edited a book on arts doyens in Singapore titled Narratives: Notes on a Cultural Journey.

Wilkie Tan graduated from Slade School of Fine Art, University College London in 1999, and received his postgraduate diploma in education at Nanyang technological University, Singapore in 2002. Working mainly with video, film and multimedia, his works deal with themes of memory, change and tension. He was a finalist in the 6th Singapore International Film Festival, Silver Screen Awards for Short Films, for his stop-motion animation ‘Seed’.

Ye Shufang deals explores issues of impermanence, audience interaction and site-specificity in contemporary art-making. These issues, fundamental to her practice, form a premise within which has evolved projects that deal with simple practices, ready-mades, and ephemeral materials. Many of Shufang’s projects and installations attempt to level the art-making process with the most mundane/basic/simple of ‘non-art’ processes; and to suggest that one process is necessary to the other; neither is more poetic/crucial/ or carries higher ideals than the other; engaging in either makes one more aware of the other. By using everyday objects and temporal materials, Shufang is also examining the value and shelf-life of a work of art.